When it comes to making or breaking habits, it’s all about friction 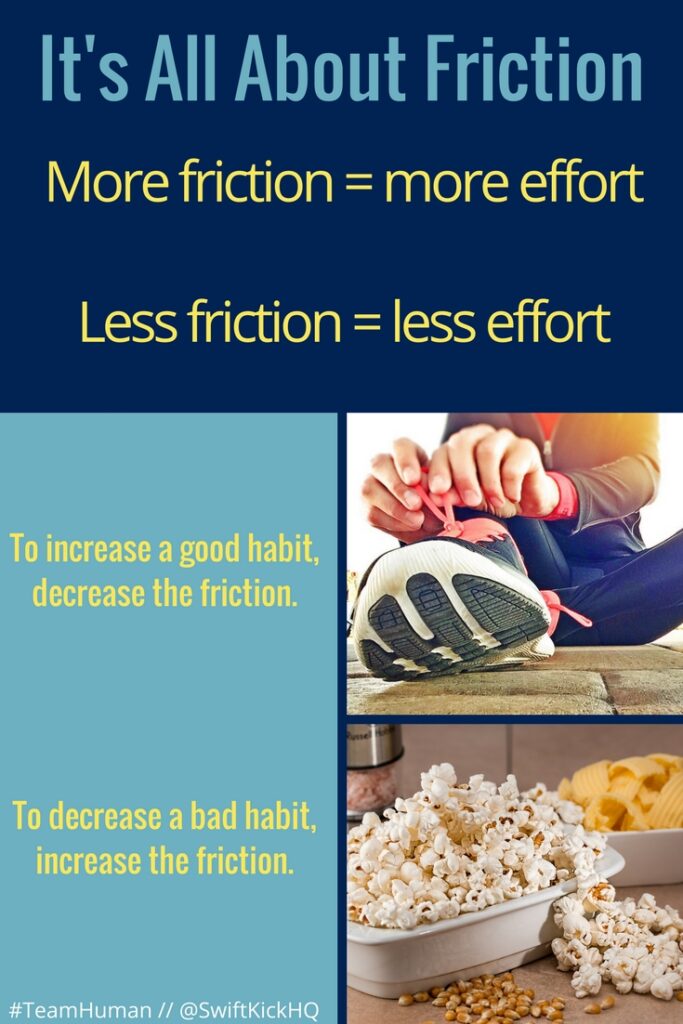 In the middle of 2016, I took up running as a sport. I quickly realized that I not only had a natural talent for it, but I also enjoyed running. But that doesn’t mean that when it’s 32 degrees out that I naturally put on my shoes and make a morning run happen. Nope, I’m not superhuman…yet.

Eventually, I learned a trick to get myself moving. If I placed my running shoes, socks, shorts, and shirt all out on the floor before I went to bed, I was more likely to go running in the morning. In doing so, I was reducing the friction, or amount of effort, it took for me to actually do the action.

On the other hand, I love chocolate. If I have chocolate in my home, I know I’m going to eat it. But if I don’t, then I won’t. My will power is strong when “eating chocolate” means getting up, going outside, walking to the store, and buying chocolate. But if all I have to do is walk to my kitchen, or even worse reach for a bowl next to me on my desk, I know I’ll eat the chocolate.

To stop my chocolate addiction, I add in as much friction as possible between me and the temptation. In a 2006 study from the International Journal of Obesity, researchers found that moving a candy bowl within arms reach would add an additional 2.1 candies eaten per day. Even the most will-powered individuals will eventually give in to the constant temptation of sugary sweets if they are within reach.

To increase your chances of performing a good action or habit, reduce the amount of effort it takes.

To decrease the chances of engaging in a bad action or habit, increase the amount of effort it takes.

Your brain makes up 1/50th the total weight of your whole body. Yet, it uses up 1/5th the total energy of your body. If it were a car, it’d be a gas-guzzling tractor. To help reduce the amount of energy it consumes, your tractor brain is constantly trying to turn things into unconscious decisions, or habits. Habits are formed over time with repetitive action. One major way to make sure repetitive actions will happen, or don’t happen, is determining how much friction there is between you and the habit. Make it hard to accomplish unhealthy habits, and make it easy for healthy habits.

While everything I wrote about above was related to individual lifestyle, the same is true within your team. Your team is just a collection of individuals, and their unconscious habits, as Charles Duhigg stated in his book, “The Power of Habit.”

“Researchers have found institutional habits in almost every organization or company they’ve scrutinized. Individuals have habits; groups have routines. Routines are the organizational analogue of habits. The best agencies understood the importance of routines. The worst agencies were headed by people who never thought about it, and then wondered why no one followed their orders.”

What are some actions you’d like to see your team be better at? Here are some quick ideas:

More creative? Build in a quick 1-minute brainstorm into your daily meeting.

Show up to meetings on time? Send them a Google calendar invite with a link (if virtual) so they don’t have to go looking for it when the meeting is supposed to start.

More innovative? Place idea boards around the office with markers for people to jot down thoughts when inspiration hits.

Whatever the action, take a step back. Observe how you could either increase or decrease the amount of effort, or friction, it takes to make it happen. You’ll trick your brain, and the brains of your teammates, into doing more of what it should be doing and less of what it shouldn’t. It’s all about friction!