Last Friday the crew of myself, Tom, and the shiny new interns Megan and Dustin all met each other in person and got to getting well acquainted, with a whole slew of company shenanigans. We started the day in the conference room, doing fun ice breaker type exercises. Tom had us draw a pig** for one of them, and then based on the characteristics told us personality traits we supposedly had. A pig can tell you a lot about yourself!

Here is my awkward little pig. Try not to judge me. 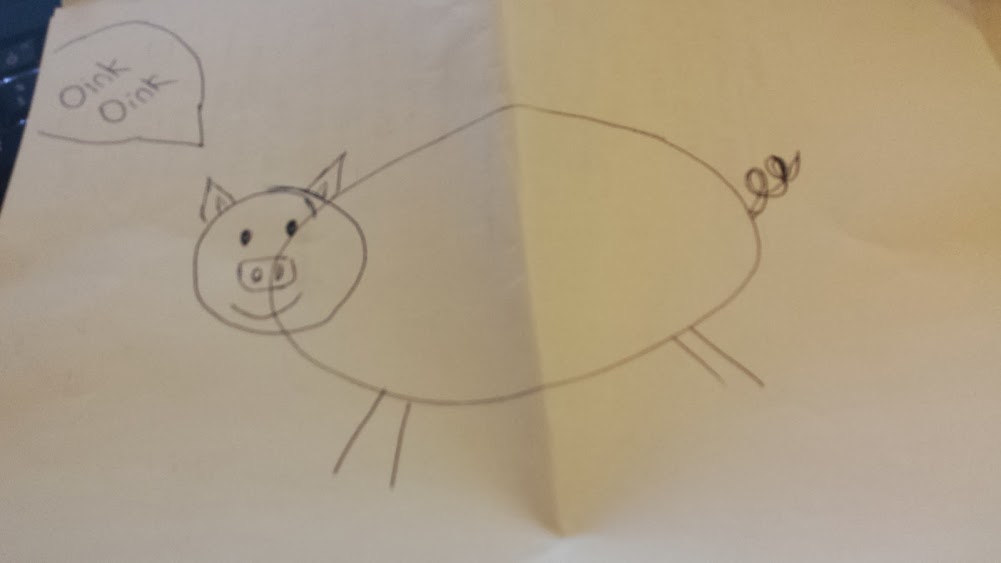 After all our giggles and silliness were out, we did a company overview/refresher on what we are all about here at Swift Kick. Once we were all well versed on the business side of things, Tom got us all up and out of the office: It was time for an adventure.

He led us to MaryHouse, a wonderful safe place that feeds and gives clothes to women in need. They are also a Catholic Worker house. We spent a couple hours labeling issues of the Catholic Worker to send all around the country, while the women who run the house told us all about their founder, Dorothy Day and the history of the Catholic Worker.  One of the women there was the granddaughter of Dorothy Day herself! I was a little starstruck because Dorothy Day is an important figure at Fordham, where I went to school. It was  a fascinating time and a nice way to “Raise the Tide,” one of the company values. We believe in helping build the community around us, including the people of New York City.

It was also funny to see the way each of us went about labeling the papers. I chose the slow and steady route: peel label and stick, over and over. Megan and Tom started getting fancy with more efficient ways: “If you fold over the label sheet, they are all already half peeled! You gotta get the one handed labeling down!” Dustin started to innovate as well. I told them they could do whatever they wanted, but I liked my system, I knew I couldn’t mess it up. We all had a good laugh about our personalities manifested in a simple task.

Us with Martha Hennessy, granddaughter of Dorothy Day. Ms. Day is in the picture behind us 🙂

We then headed to lunch in Chinatown…in the middle of Chinese New Year. There was confetti and shiny things in the air and on the ground. Children in the traditional dragon costumes roamed the streets with the hundreds of people there for the festivities. Dustin and I joked that we felt like we were in a action adventure movie and that a car was going to explode in the chaos. None did, thank goodness.  In the middle of our lunch, a few of the dragons came into our restaurant  to bring good luck to the venue. I was laughing for Megan; it was her first time in New York City, let alone being on a crazy company retreat, let alone on Chinese New Year. Sounds like a sensory overload to me!  She definitely had a great trip to New York.

Look how happy Megan is in Chinatown!

After lunch we walked back to the office and got to the strategy part of our day. Hours later, we had plans for several amazing projects drafted up and ready to be put into our schedule for the next two quarters. We then headed to dinner in that crazy tiny Indian restaurant from last retreat with all the Christmas lights (remember?). 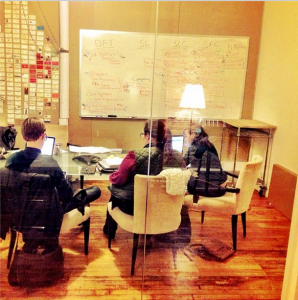 Tom took a sneaky photo of us deep in the planning stages.

We ended the night as good friends in Astor Place, where we spun the big cube (it takes teamwork), and then parted ways…after a company selfie, of course.

Needless to say, we are excited for a great year of doing big things, especially because we are all friends, instead of just co-workers.

Sabina is the Community Manager at Swift Kick, and loves that her job is dedicated to helping students be as awesome as they were meant to be. She is a graduate of Fordham University (go Rams!) and has fond memories of being an Orientation Leader and on the board of the Filipino club while in college. Her life goal is to be a perpetual ball of sunshine. Find her on twitter @sabinadeelight! To read her personal blogging adventure check out: 14tothefullest.wordpress.com