Keep Yourself and Your Team on Track with a Prioritization Funnel 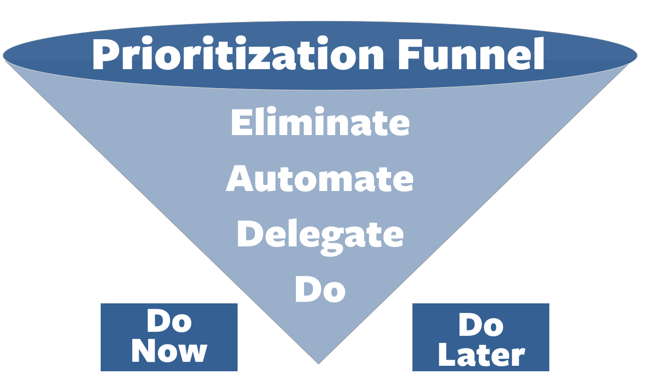 Through a casual conversation with one of my employees, he asked if he should still continue to update a financial document every day. In confusion, I asked him what document he was talking about. He then sent me a link and I found myself looking at a document that was at least 10 months old and no longer needed. I knew that. Be he didn’t know that because I never told him. He thought I was still looking at the document every day, so he updated it, just like I had told him, every day. Actually he was doing it two times a day, but who’s counting?!?

In my mind I did a quick calculation of how much wasted time this employee spent updating a document that was no longer needed. At 10 mins per day for 10 months, he wasted around 33 hours of work. That’s 4 days!

That got me thinking about all the other little tasks that my team is working on that are outdated and wasting time. I needed a way to check in with myself and my team to make sure what we are doing is the most valuable use of our time.

That’s where the Prioritization Funnel (PF) comes in.

Here’s how it works:

STEP 1 – Write out, on a whiteboard, every task that a team member does on a regular basis.

Eliminate (E) – Does this task need to even happen at all? Do we need it? Is it worth the time time we put into it? If you answered “no” then put an E next to this item. If you answered “yes” then move on to the next step.

Delegate (D) – Ok, there is no way to automate this task, but do I/you need to do this task personally? Let’s say my per hour wage is $20/hr. Is there someone who we are paying $15/hr that could do this task instead? Or is there an intern that could do this task? Your goal should be to up the value of your per hour work. Someone who gets paid less might be able to do the task, so give it to them so you focus on more higher valued tasks. If you answered “yes” then put a D next to this item. If you answered “no” then move on to the next step.

Do Later (DL) – If this is something that can be done later because it’s not really that important, then label it as DL.

STEP 3 – Create an action plan for each item.

STEP 4 – Repeat this process once or twice a year to keep your on-going task list as productive as possible.

A complaint I hear about running through the Prioritization Funnel Process is that it’s going to take additional time that someone doesn’t have. This may be true, but if done right, the first time it might take additional time, but it could free up hundreds of hours. The alternative is to continue to run on the never-ending hamster wheel task list that fills up your entire day.  I’ll end with a quote from the famous management consultant Peter Drucker:

“Nothing is less productive than to make more efficient what should not be done at all.” – Peter Drucker