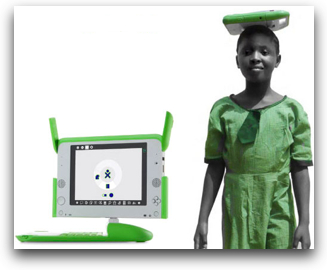 Whether educational institutions like it or not, education is changing and walled gardens are evaporating. New ideas in education are emerging…or, probably better to say, old ideas are finally able to be technologically implemented. Whichever the case, the change is no longer bound by old ideas like nationality, income, time, or location.

The One Laptop Per Child Association is a non-profit organization whose mission is to:

Create educational opportunities for the world’s poorest children by providing each child with a rugged, low-cost, low-power, connected laptop with content and software designed for collaborative, joyful, self-empowered learning.

To date, the non-profit has shipped approximately 1.4 million laptops to the world’s poorest school children in 24 countries such as Rwanda, Sierra Leone, Ghana, Colombia, and Uruguay. The current tuition at Stanford University is around $35,000. Don’t have the money, but still want a world-class education? No worries. Stanford, along with other institutions such as MIT and Harvard**, post many of their classes online for FREE. You won’t get a degree by taking these courses, but if your goal is to learn for the sake of learning then you now have free access to courses on ANYTHING you want online.

Update 9/6/09: Academic Earth aggregates course videos from leading universities and allows you to create your own “academic playlists.” Every Tuesday, educators on Twitter start tweeting up a storm as they begin another session of their weekly digital classroom conversation. The main topic of discussion is voted on by members the previous day (Monday).

To coordinate the conversation all the participates to use the hashtag #edchat in their status updates. The idea was started by Tom Whitby, Shelly Terrell, and Steven Anderson as a way to coordinate the many education conversations happening on Twitter at any given moment.

While the majority of the conversations occur within standard business hours, people like Chad Sansing of Charlottesville, VA decide they want to ask the tough questions at 3:57 am Wednesday morning!

Chad isn’t alone in participating at extremely off hours. Hundreds of tweets happened between 1:00 am and 4:00 am on Wednesday morning. Participants have the ability to plug into the #edchat conversation ANYTIME they want.

This week’s Tuesday #edchat included 1,446 tweets from 235 contributors from all over the world as displayed in the map below.

To be expected, many countries in North America and Europe participated as well as a few in the Middle East and Southeast Asia. But, look closely and you’ll see the most impressive country on the list is the Falkland Islands.

According to Wikitravel, internet access on the Falkland Islands is still primitive, but someone on the islands was motivated enough to be a part of the international #edchat. You can be ANYWHERE in the world and plug into an international conversation on education.

It’s been a dream for a long time to have free, open, and equal educational opportunities for every single person in the world. Now that anyone can learn anything at any time from anywhere in the world, that dream is not far off.