“A person’s name is to him or her the sweetest and most important sound in any language.” – Dale Carnegie. 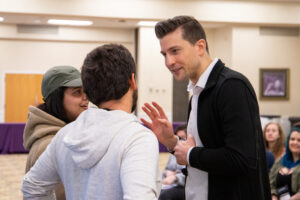 Turns out that Dale Carnegie’s quote is backed up with research. In one study, a group of participants listened to a series of different names, with one name in the series being their own. They told the participants to try to not to make any physical movements during the experience, but rather to just listen to the names. While the participants listened, the researchers scanned their participants’ brains for activity. Each time a participant heard someone else’s name, their brain showed nominal activity.  When they heard their own name, however, their brain would light up in a region that’s associated with a person’s sense of self. Interestingly enough, the same brain activity was found in people who heard their name while in a vegetative state in a hospital.

We hold our names so close to our own sense of who we are that when we hear our name, our brains, and often faces, involuntarily light up like a magic trick.

Leaders learn, remember, and use names

Unfortunately, if you are like most people, within 15 seconds of hearing someone’s name, you’ve already forgotten it. Don’t worry, you’re not alone; it happens to almost everyone, all the time.

I’m sure the magic trick you’d really like to learn is how to remember anyone’s name. Well, let me pull back the curtain and tell you how I was able to remember the names of 40 people with a few simple steps:

The reality is that most people don’t even try to remember a person’s name. Once the person said their name, the other person didn’t even bother to hear it. They were most likely focused on what they were going to say next. So, the first step is to remember. Commit to consciously listen to their name and say it inside your mind once you hear it.

2) Anchor With An Association

Instead of just remembering someone’s name, try to link their name to something interesting they said. For example, if Seth said he loves soccer, then I’d wouldn’t just repeat the name Seth in my mind. I’d repeat the sentence, “Seth loves Soccer.” Inside my brain, each time I say the sentence, I get a visual of Seth playing soccer. It might be hard to visualize the name “Seth,” but “Seth playing soccer” is much easier.

Make it a point to, either verbally or in your head, say their name back to them a few times during the conversation. This practice acts as a way to solidify the name into your memory.

At this stage, even with these three tips, you probably still don’t think you’ll be able to remember names. I used to think the same way, until I met a guy named Matt Templeton. He told me he was amazing at remembering names, but he wasn’t always that way. I eagerly asked him what changed. He responded with, “Oh, I just started to believe I was good at it, and sure enough, I got good at it.”

Leaders remember and use names because it makes the other person feel respected and valued. Using their name will leave a lasting impact of connectedness, long after the conversation is done. And it’s not just a feel-good strategy, because as best selling author, Charles Duhigg, mentions in his book, The Power of Habit*, “Retention, the data said, was driven by emotional factors, such as whether employees knew members’ names.”

Facebook
Twitter
LinkedIn
Email
PrevPreviousTips for Staying Connected and Happy While Social Distancing During COVID-19
NextNOW OFFERING: Virtual Leadership ProgramsNext
JOIN OUR NEWSLETTER
And we will send you tips on how to create a Culture of Connection™ in your organization.