You know how they say people look 15 lbs (7 kg) heavier on camera? Well the same is true for your energy on camera, but in the opposite way. You will be perceived as having 15% less energy when on camera than when in person. This is due to the physical distance and the two dimensional aspect of the screen. What’s the solution?

For those who don’t know, Gary “Vee” was originally a wine business guy who built a media empire off of recording videos talking about wine and then posting them online. He’s famous for his unique style and boisterous personality on stage and in front of the camera. If you have a moment, and the stomach for R-rated profanity, just watch this interview with him and you’ll see what I mean. 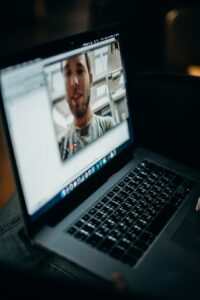 You don’t have to be just like Gary Vee; you just need to channel his energy. It doesn’t mean you need to start swearing and being loud on camera. Rather, it’ll remind you to increase your energy by at least 15% from what you are used to. This 15% increase will negate the 15% loss that happens with virtual environments.

This matters is because your energy state, especially as the Moderator of the group, will impact the energy state of the rest of the members. A concept called Emotional Contagion states that people tend to take on the emotional state of each other. In other words, emotional energy can transfer from one person to another. While negative energy is transferable, so is positive energy. In some cases, having one positive person on a team can change the attitude of the whole team.

“Emotions spread from person to person because of two features of human interaction: we are biologically hardwired to mimic others outwardly, and in mimicking their outward displays, we come to adopt their inward states.” – Nicholas A. Christakis, Connected: The Surprising Power of Our Social Networks and How They Shape Our Lives*

While the idea of being the upbeat Moderator is a good idea for your in-person meetings, it’s especially important for your virtual meetings. Otherwise, you might lose the group’s engagement due to low energy.