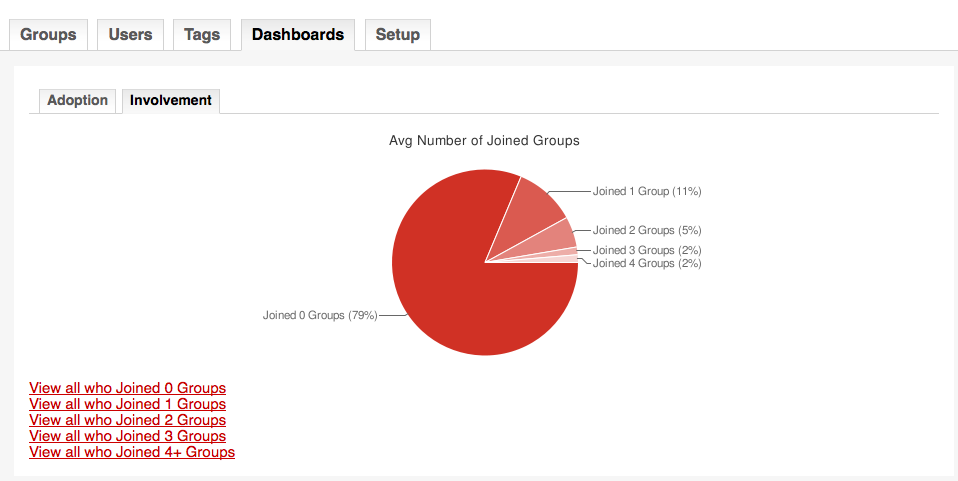 San Antonio College was the first school to launch Red Rover in ’09 with the new involvement dashboard.

Talk about doing more with less in times of tight budgets:

Two hours after they ran their orientation, Tyler Archer was able to go into the involvement dashboard and see what actually happened.

We’ve talked about this forever. The “Data Don’t Drive” paper from the Lumina Foundation bemoans research and data gathering that is never used and advocates for “data-based decision-making.” They simply want more data that actually empowers members of the academic community to be agents of change.

Tyler gets a live “involvement dashboard.” Her data is Real-Time. (No 18-month delays on compiling the self-reported engagement metrics here!) And she, as the practitioner, can act on that immediately. That’s powerful. That’s just the way it should be.

Here’s how it works:

The chart tells her: Who joined how many campus groups?

She can then click on any segment. She can focus on students that haven’t joined any groups yet, or she can focus on the smaller percentage of hyper-engaged students.

Let’s say she starts with not yet involved students, looking to get them connected to at least one group.

1) She clicks on “View all Who Joined 0 Groups”

2) She can click the gray arrow on each name, revealing the student’s keywords, their year, major, residence hall (if applicable), and a link to their social network or any other links (a blog, etc.)

This gets to some exciting new areas. What we’re seeing is a correlation between the number of words students put into their profile (the depth to which they describe themselves) and their involvement on campus. This is a new area of exploration, but we think the measure of digital identity development in the educational context will become a key metric.

What is exciting about the Folksonomy at the heart of Red Rover is that even when a new student puts in only a little bit of information, it’s still wonderfully useful.

Let’s say Tyler is going through her list, clicking around, looking to connect students to groups, clubs, or orgs.

She comes to David here:

[By the way: David has been told that all of his info on Red Rover is public, so he’s made the conscious choice to put this info in the open. No FERPA issues and no problems with using the collective language/activity for research. By linking his Facebook, he’s simply confirming his identity and giving people options for getting a hold of him, his info is still behind Facebook’s privacy filters.]

David has not joined any groups and he only put in three words, which is approximately 1/4 of the average number of words we are seeing.

3) Tyler clicks on “basketball” and can see two hugely important bits of information: a) there are 58 other people in her small spring orientation that like basketball.

b) there are currently no groups/clubs/orgs that have anything to do with basketball.

What she does with the info is up to her as the practitioner.

4) In two clicks she can email or Facebook message David and let him know that there are 58 other basketball players in his year – does he want to be one of the leaders of a new club?

5) Or she can click on the number in that window and get a list of all the new students (or existing students) who like basketball. She can message them all with a time to meet on the courts.

She could easily look for established leaders of one group, who may be older, who also have “basketball” as a keyword, and may want to take on another group.

In less than 5 minutes she can meet David’s needs. She can make him (and 58 other brand new students) feel like the school listens, cares, and is there to help. How much does this group cost the school? Nothing. It’s just a few clicks.

Tyler isn’t required for it to work, but she’ll play with it and help where she can. Because she’s not in student life to do the paperwork. She’s in it because she loves helping students. This new dashboard just makes it incredibly fast and easy.

6) She can go back to that pie chart and watch it move.

7) If anyone above her asks “Just what does student life/activities do anyway?” she can tell David’s story. Or better, she can send them David’s blog.

Facebook
Twitter
LinkedIn
Email
PrevPreviousThe Value of a College Degree in the Networked World
NextBlogs as E-portfolios: Better for the Students, Cheaper for the .eduNext
JOIN OUR NEWSLETTER
And we will send you tips on how to create a Culture of Connection™ in your organization.